Sweet swirls of cinnamon, brown sugar and nutmeg all rolled up inside puffy Eggnog Cinnamon Rolls.  The Eggnog Cream Cheese Icing caps off and sinks right into the middles of each of these warm swirling sensations! 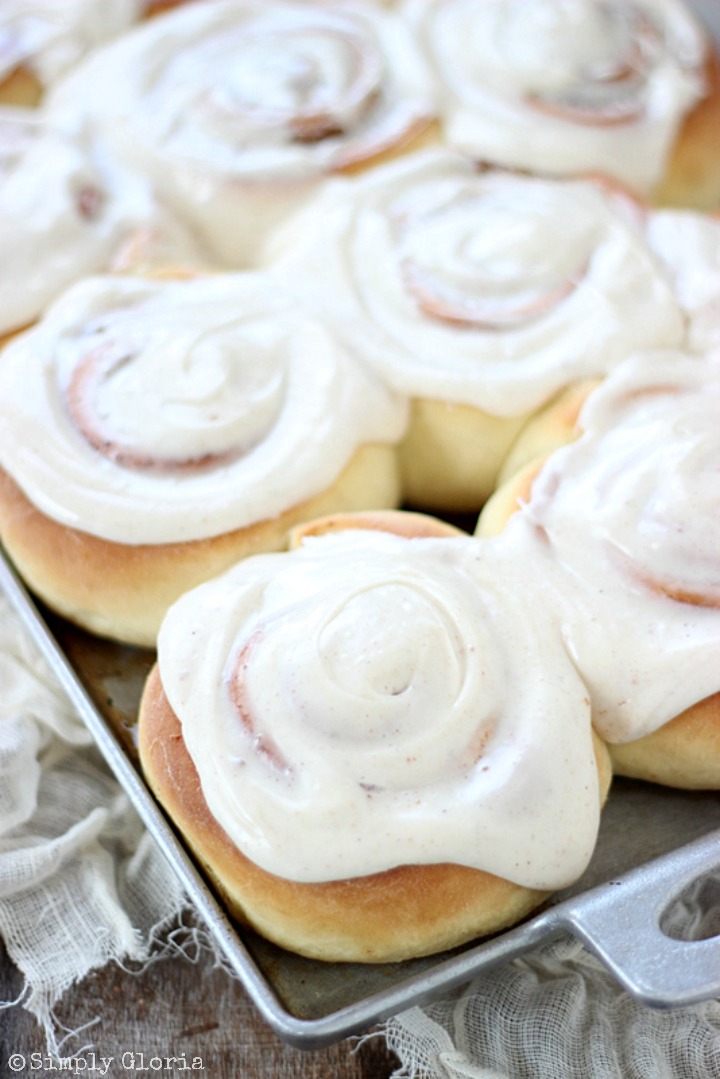 Are you ready for a sweet holiday treat this eggnog season?

The creamy drinkable stuff just isn’t for drinking.  In my little world, it means eggnog is for baking!

These special cinnamon rolls just got a little hyped up over here– eggnog style.

Special in the sense that there’s sweet, creamy eggnog twirling around in every crevice of these tender, moist cinnamon rolls!

The delectable cream cheese frosting even has a splash of eggnog mixed within.  It’s truly a frosting you can sit and eat straight out of the bowl.  Not that I’ve ever done that or anything…

I’m basically  in love with making (and eating) cinnamon rolls on any given day.  But these Eggnog Cinnamon Rolls are sinfully delicious!  Not only is there eggnog in the actual dough, but there is also eggnog in the creamy frosting.  The creamy eggnog really gives these cinnamon rolls a moist texture and exquisite taste without being overbearingly eggnoggy.  At least that’s what the teenager said– which, might I add, is one of my official taste testers.  Just for the record, he devours (more than a few of) these before they can even cool down.

I’m going to take you through the simple steps in making these amazing cinnamon rolls from scratch.  Have all of your ingredients out and ready.  Huge note:  your eggnog and eggs need to be at room temperature.  But if you are impatient like me, set your cold eggs in a bowl of hot water.  The cold eggs will cool the water down and the hot water will warm the eggs right up.  Works like a charm.  The other thing, the cold eggnog.  Pour 1/2 cup cold eggnog in a liquid measuring cup.  Set the measuring cup into a bowl of hot water.  This is my method of rushing things along.

You can make and have these (big!) babies baked all within an hour!  First things first, there’s absolutely no need to be intimidated by the Y word = yeast.  It’ll be your best friend.  I promise. 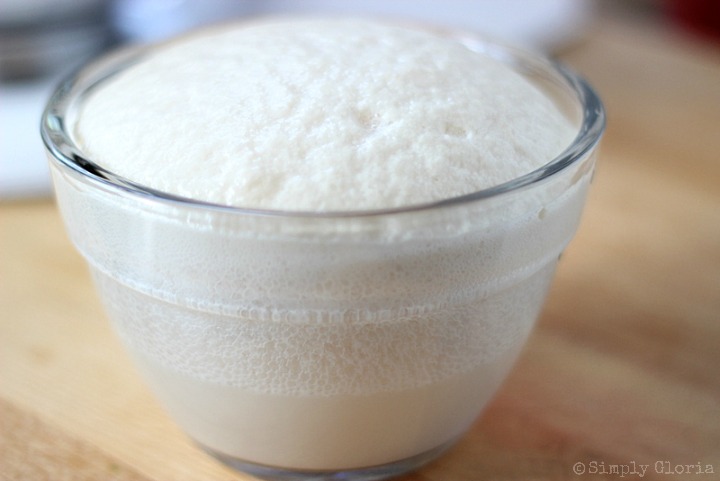 Place the (active dry) yeast, sugar, and water together.  Give it a little stir.  Set off to the side for 10 minutes.  I like to set mine inside of the microwave (no power), because it is a draft free zone.  Just let the yeast do it’s magic.  Once your yeast is proofed, as shown in the image above, stir in the honey.  It will deflate a little.  No worries. 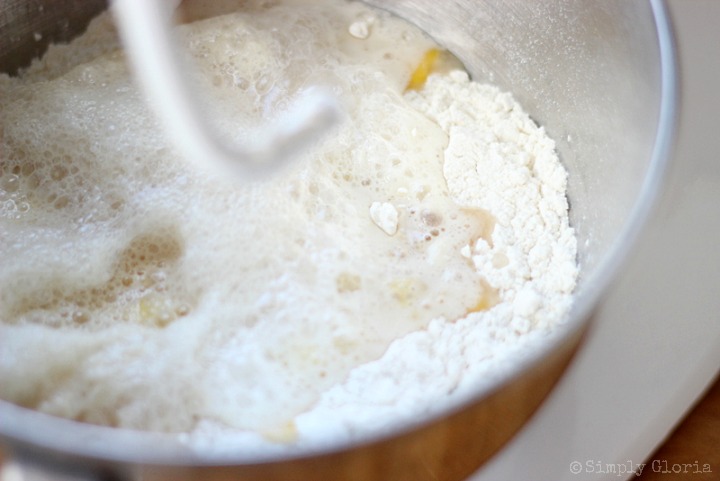 If you have a stand mixer, attach the dough hook or use a large wooden spoon to mix by hand.  Put only 3 cups out of the 3 3/4 to 4 cups of bread flour in a large mixing bowl.  Then add the proofed yeast-honey mixture with the room temperature eggs and room temperature eggnog.  Along with rum extract.

I almost always use the real rum stuff– my much bigger bottle of baking Spiced Rum.  You know, just like the eggnog, love it in baked goods!  But, Miss Beatrice behind the tiny pharmacy counter with the ever more tiny alcoholic beverage area (our town’s liquor store) in the near corner, has that look of very high doubt when I tell her it’s for baking… at 9:00 in the morning. Because I should had some how known Utahns can’t start drinking until 10 a.m.!  Silly me. 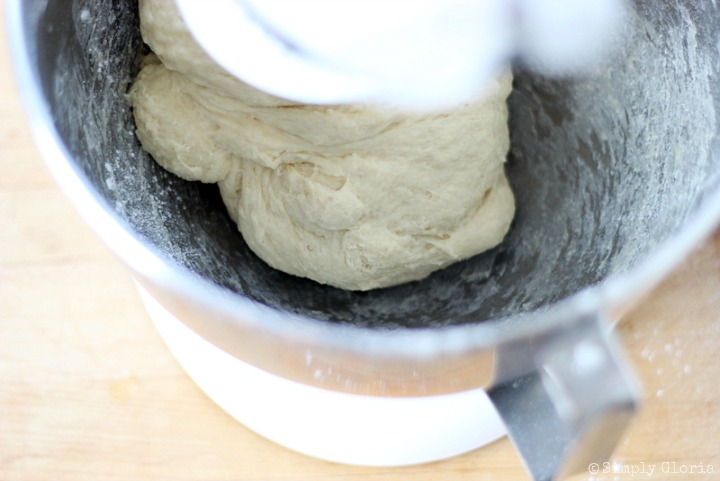 Mix the mixture on low and slowly add the last 3/4 cup to 1 cup of bread flour.  You want to make sure it’s not sticking to the sides of the bowl.  This takes about 4-5 minutes to achieve– in a stand mixer.  Don’t over mix. 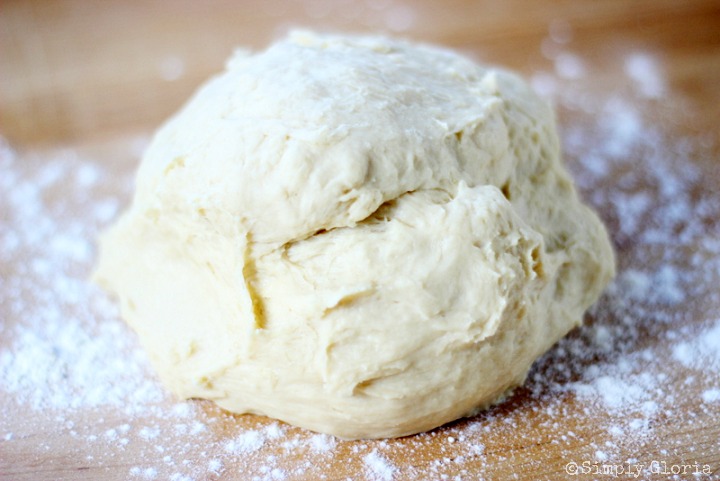 Take the ball of dough out of the bowl and place on a floured surface.  Place the empty bowl on top to cover the dough for 10 minutes.  By doing this, it relaxes the gluten in the flour  It also helps the dough to cooperate when rolling out.  AND when baked, the texture is super tender… almost literally melts in your mouth. 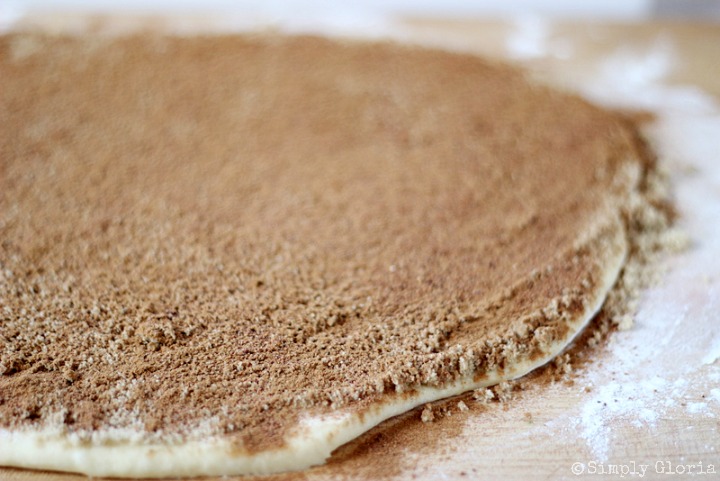 Roll out the dough (on the lightly floured surface) to a rounded rectangle size in the neighborhood of 15 inches by 12 inches.  And, about 1/2 thick.  Be sure to not over work the dough.  What makes this so fun, is that it doesn’t need to be perfect.

Spread butter flavored shortening on the laid out dough.  (I’ve tried real butter and to my surprise it doesn’t come out with the same great results.)  Pile on the brown sugar, sprinkle the cinnamon and nutmeg to all the edges.  Except the one edge you are going to have the roll sealed. 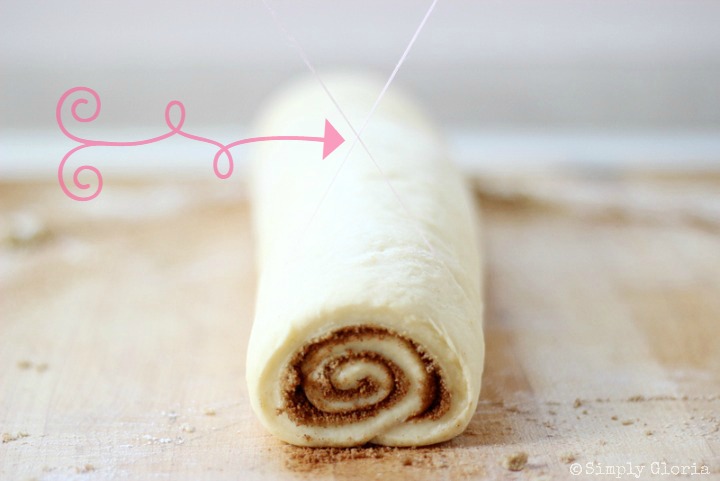 Grab a long piece of thread and slice it up underneath the roll.  Crisscross the thread while going down onto the dough.  It will cut with out smashing the dough.  Tip:  Only use a knife to mark the top of the dough (to get even cut pieces) before using the thread.  Makes about 12 cut rolls. 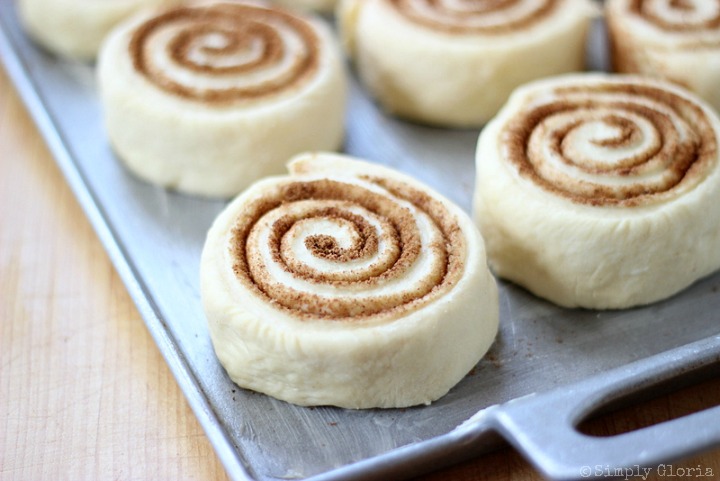 Gently lay the rolled pieces of dough onto a large greased baking sheet. Place each one about 1/2 inch apart to allow room to rise.  That includes from the edges from the pan.

Set these beauties, uncovered into a draft-free zone… aka, the turned off microwave, for 10 minutes.  Tip:  Before placing the dough in the (off) microwave, boil water in a microwave safe bowl and leave in there until it’s time to place in the dough.  It will make the draft-free zone like a warm cozy sauna for the rolls. 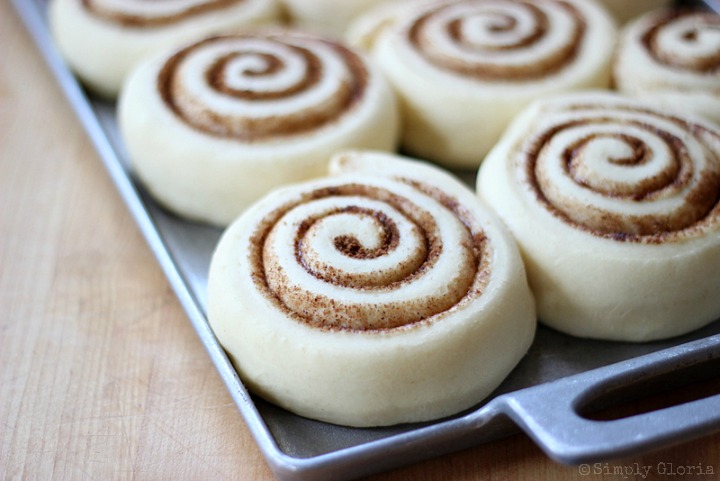 Now that the cinnamon rolls have had some time to rest in the draft-free zone, they are looking ready to bake!

They will puff up even more the moment they enter the preheated oven. 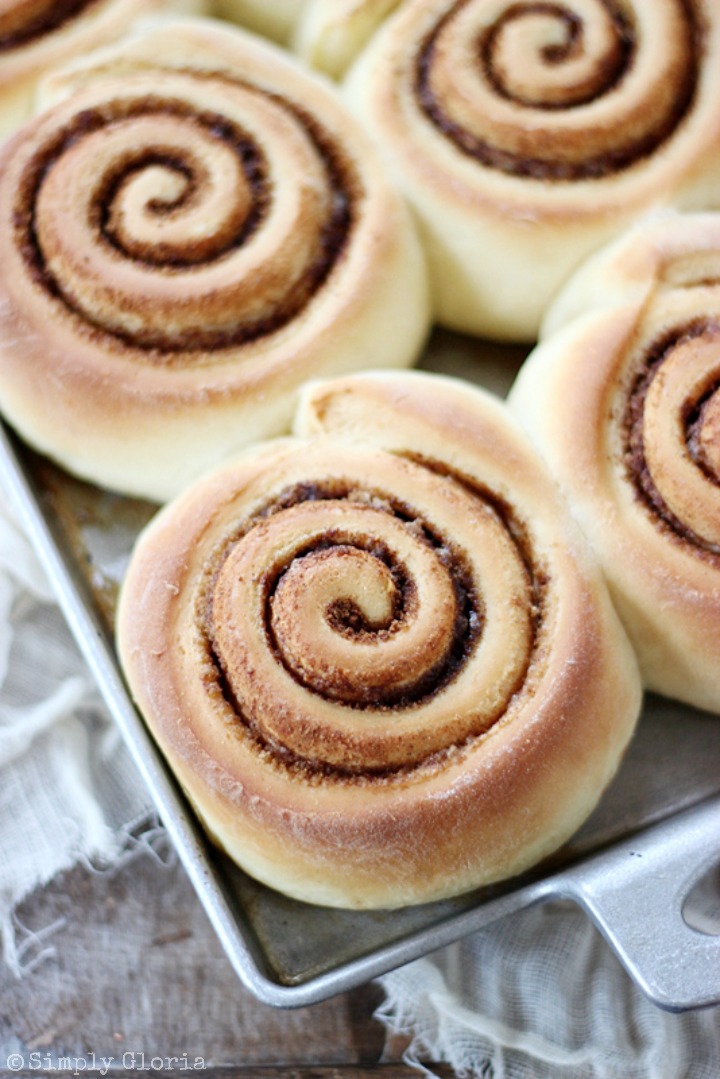 While the aroma of fresh baked sweet rolls are baking in the oven for 20 minutes, whip up the Eggnog Cream Cheese Icing!

The moment the rolls come out of the hot oven, smother them with the icing so it gets into every crevice! 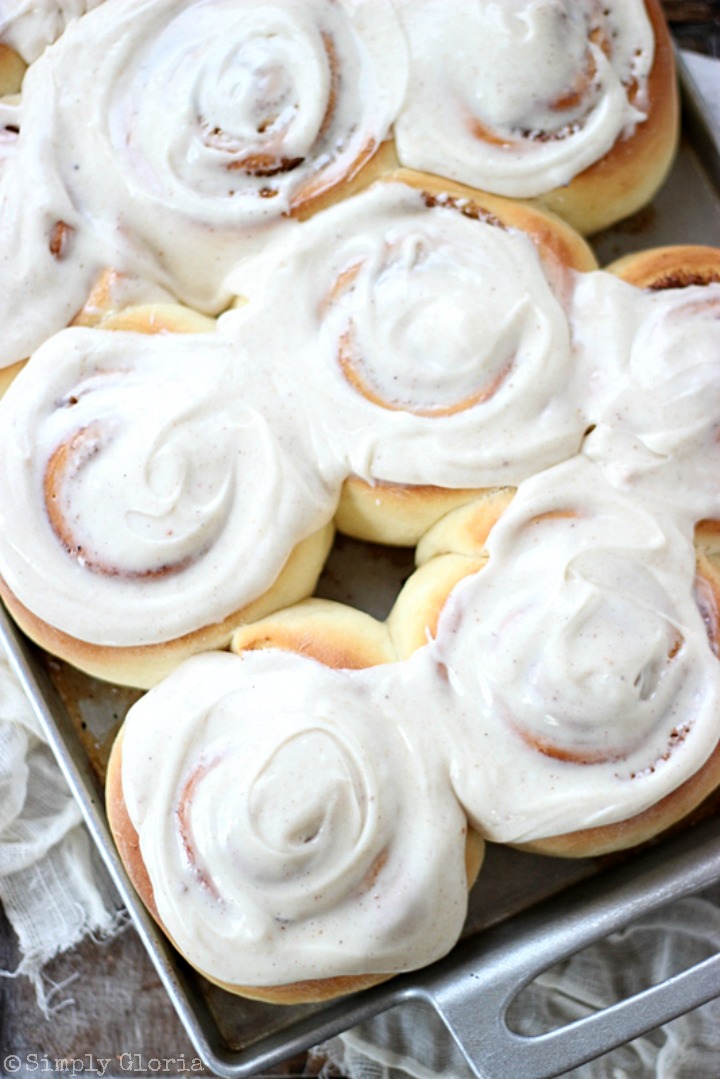 Sweet swirls of cinnamon, brown sugar and nutmeg all rolled up inside puffy, drunken Eggnog Cinnamon Rolls. The Eggnog Cream Cheese Icing caps off and sinks right into the middles of each of these warm swirling sensations! These may be made the night before and baked in the morning!
Write a review
Save Recipe
Print
Ingredients
Icing
Instructions
Icing
Notes
By Simply Gloria
Simply Gloria https://simplygloria.com/ 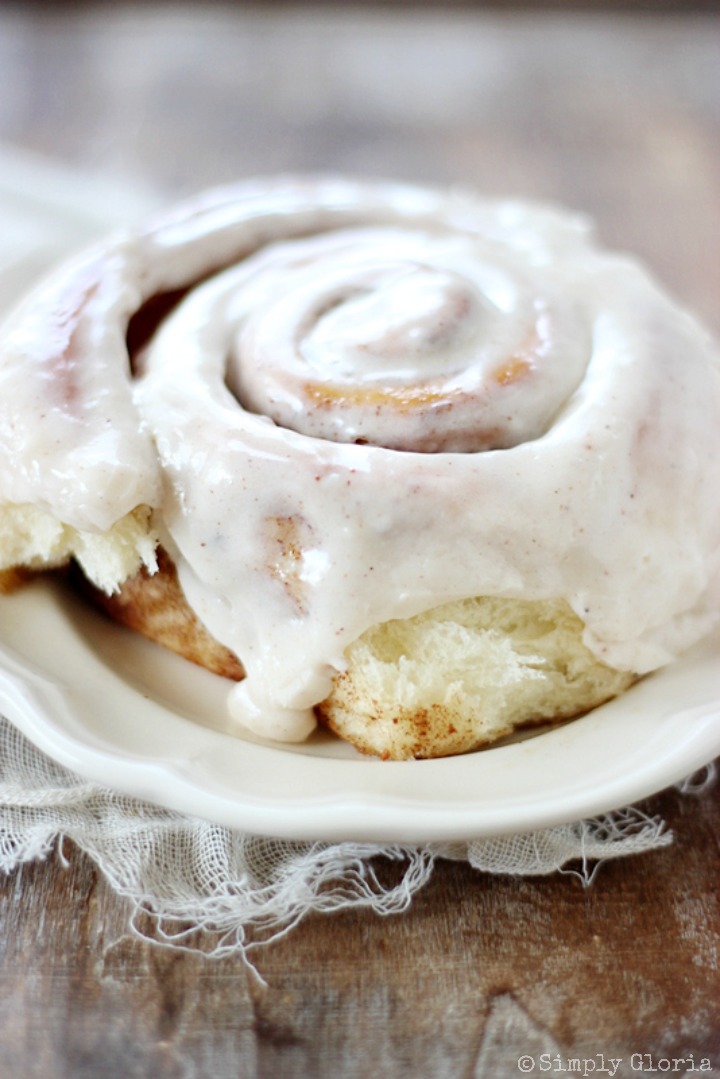 I hope you enjoy these homemade baked Eggnog Cinnamon Rolls as much as my family and friends do!