Perfectly seasoned sourdough bread pieces merged with crispy sausage, onions, and lots of garlic.  Melted cheese is tucked in between this heavenly dish of Sourdough Bread Stuffing with Italian Sausage! 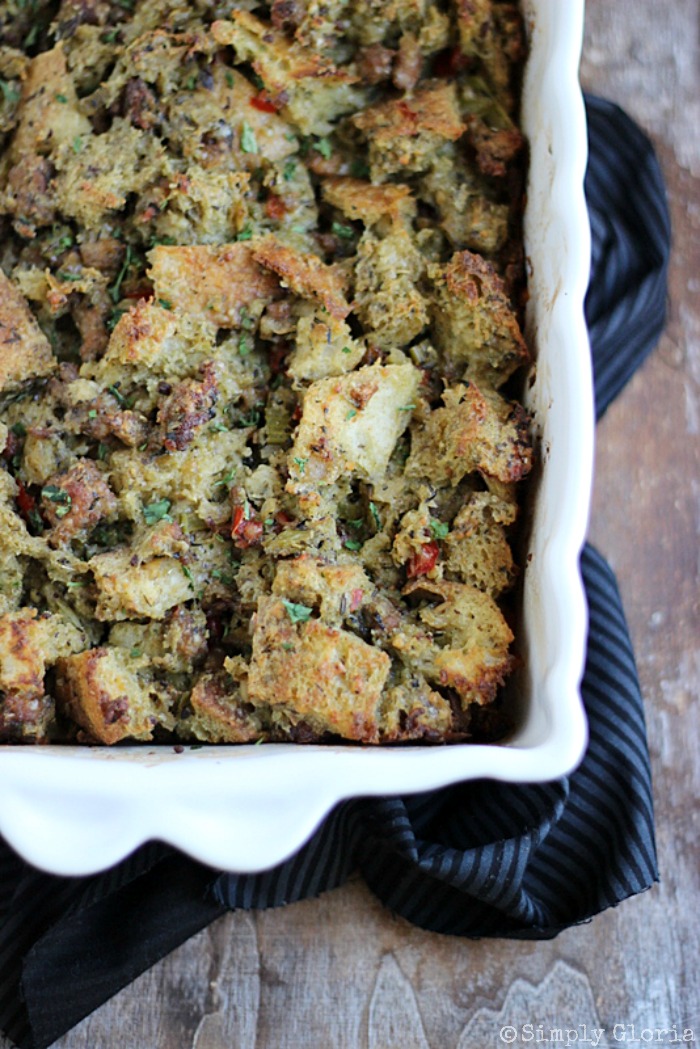 In your castle, do you call it dressing or stuffing?

Here in mine, we call it stuffing.

Regardless if it’s stuffed in the cavity of a bird, a thick pork chop, or beautifully baked in a dish.  Stuffing is one of those dishes that complete your special meal.

I’ve been having the homemade real stuff(ing) ever since I can remember.  It’s all I’ve ever known as stuffing.  Then as I ventured in the big girl world, I’ve attempted the little box of tiny kibbles of dry bread crumbs with an even smaller packet of seasoning.  And I sadly admit, it’s actually pretty good!  But you’ll be loving this homemade version far more!

So, for those of you who want to venture out of the box and prepare a simple and delicious real stuffing/dressing, I’m going to give you the low down on making the incredible real stuff!

Sourdough Bread Stuffing with Italian Sausage is a mixture with just the right amount of ingredients swirling around together.  Sourdough bread is key.  But you can use French bread in a pinch.  Crispy Italian sausage sauteed with celery, a red bell pepper, onions and garlic.  Then the onions and garlic had a baby… the shallot.  Add all those.  Parmesan cheese and a bit of liquid.  Chicken broth or stock, half & half cream, and a beaten egg help keep it all together to make a tender, moist (not soggy!) stuffing.

I’m going to share with you all the simple steps to making a successful stuffing. 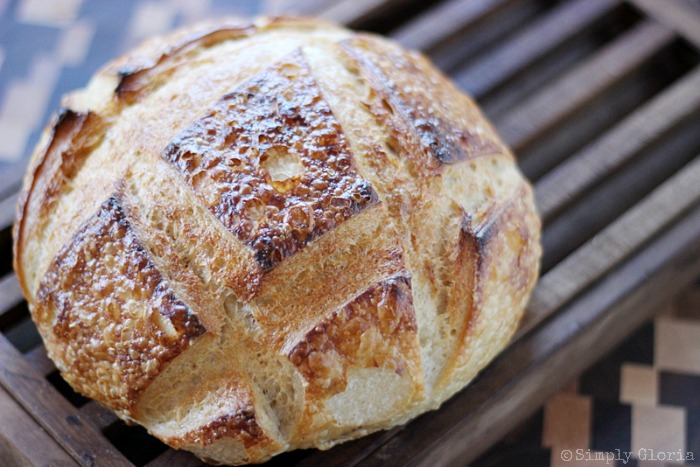 Sourdough bread or French bread has such an amazing texture that obtains the moisture in the stuffing without it becoming soggy.

Tear the bread into medium bite-size pieces and place in a large mixing bowl. 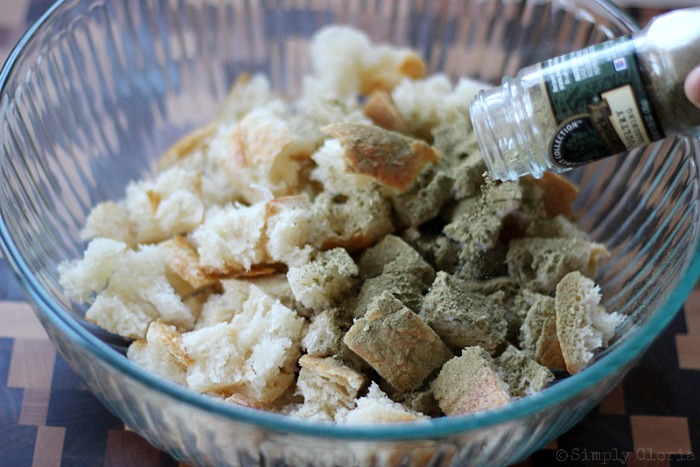 Coat the bread pieces with poultry seasoning and stir.  Set aside. 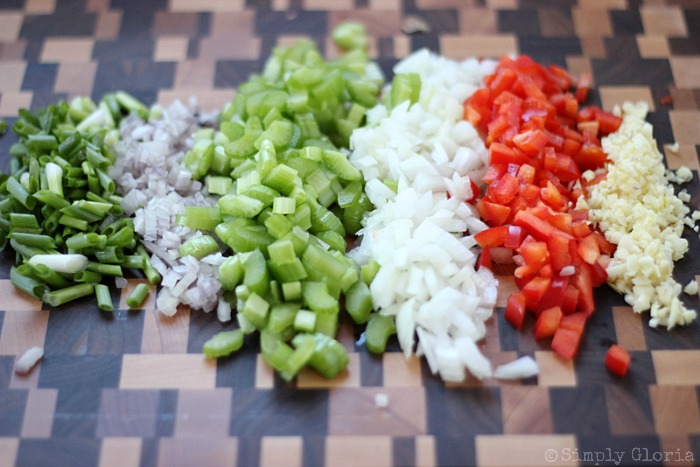 Chop, dice and mince the veggies:  green onions, shallot, celery, onion, red bell pepper, and garlic.  Also set off to the side.

Heat a large skillet on medium heat with a couple drizzles of olive oil. 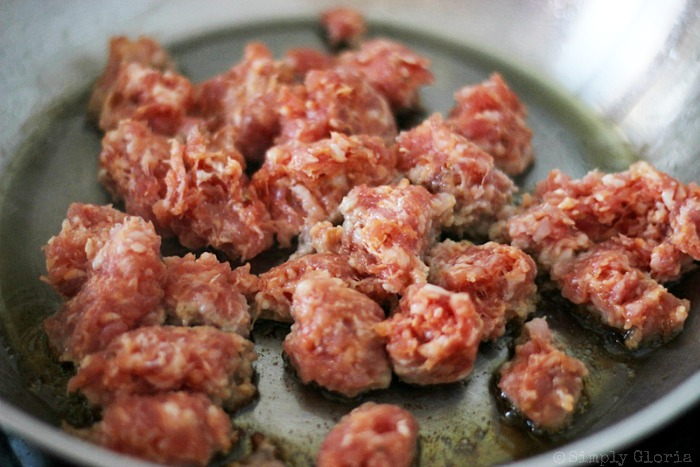 Remove the casings from the Italian sausage and break into pieces.  Cook and brown the sausage for a few minutes. 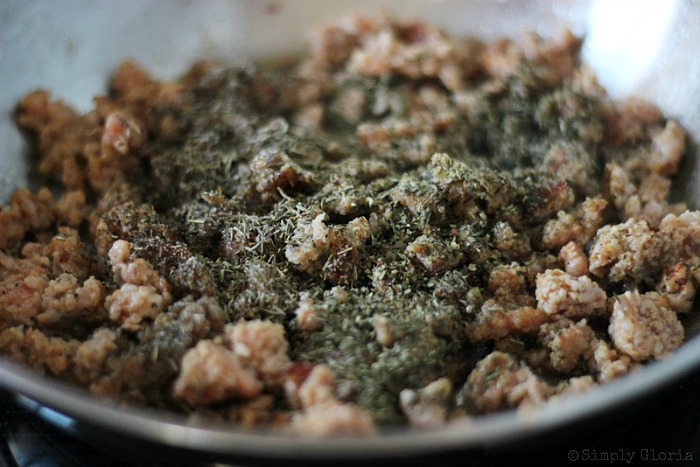 Time to sprinkle in the seasonings! 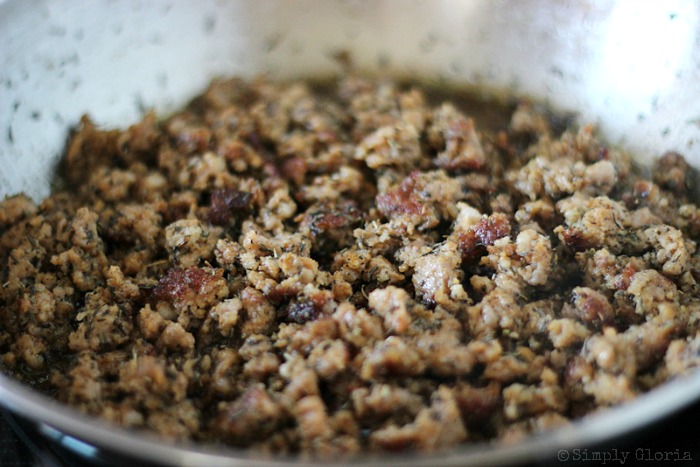 Now it’s time to add in the chopped and diced veggies. 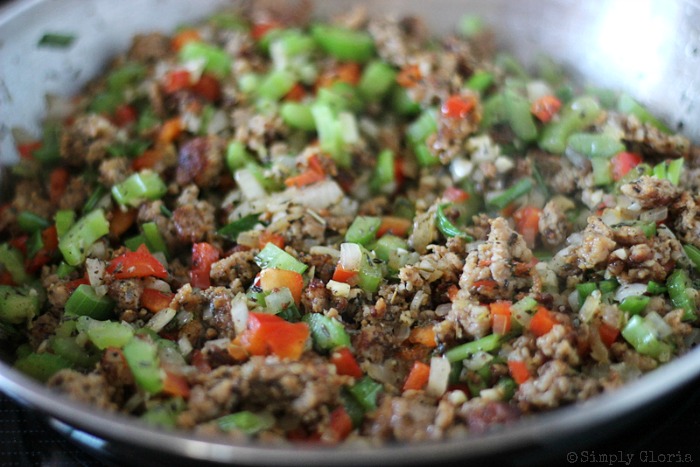 Isn’t it looking so delicious?

But here comes the good stuff… 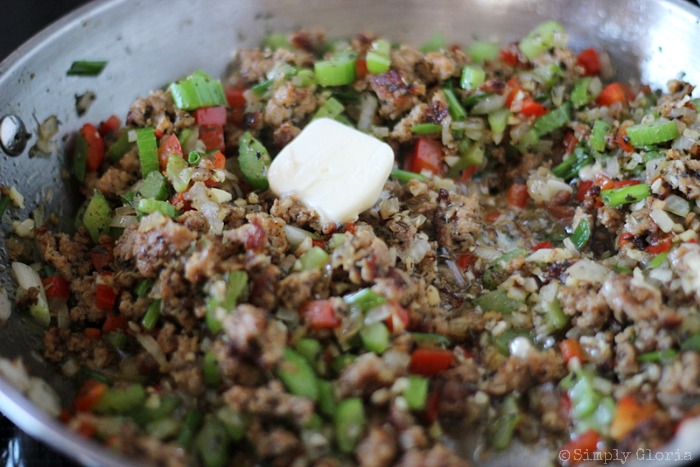 A dab of creamy butta!  It really does make the world go around, don’t you think? 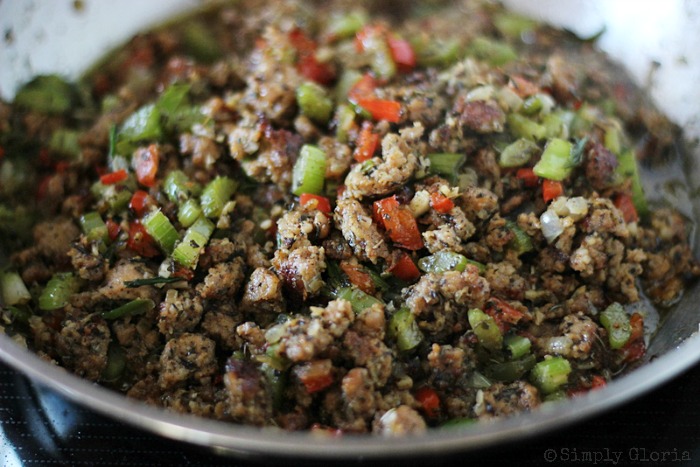 Sautee it all for a few more minutes and take off heat.

Remember the bowl of bread off to the side? 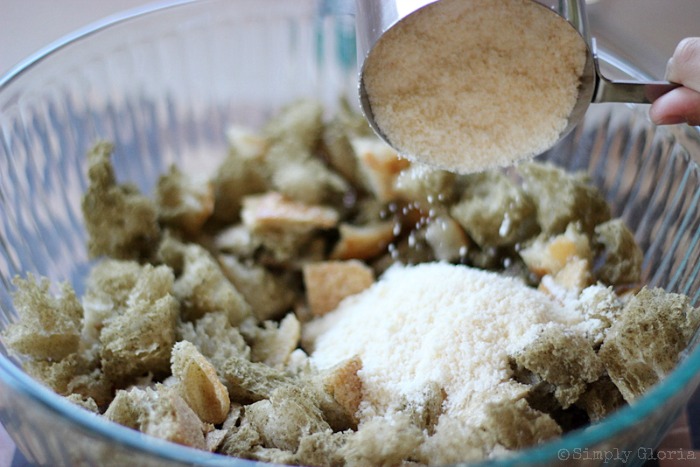 Now add all of that Parmesan cheese!  (Thanks to my little Parmesan helper.) 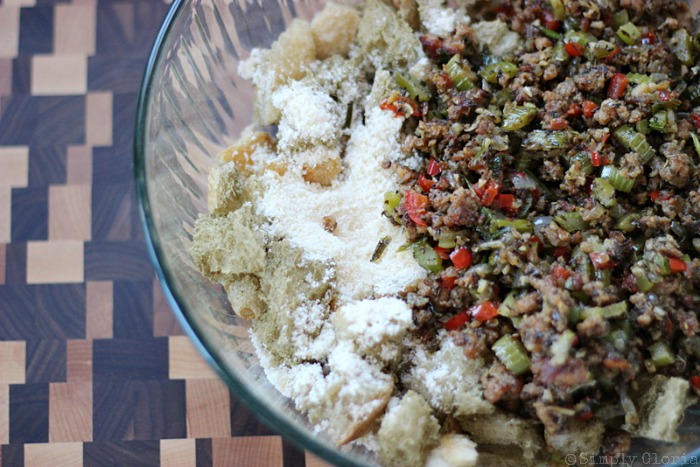 Add in the sausage mixture to the bread and Parmesan. 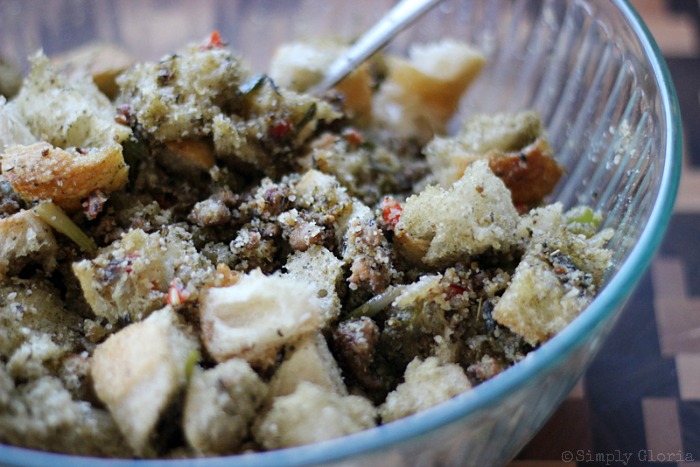 Toss and combine the awesomeness!

Now for the simple ingredients to make this stuffing moist, and not mushy… 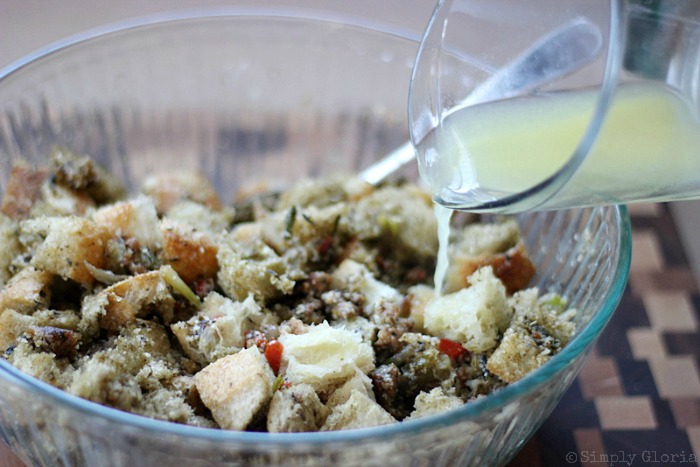 Pour in the chicken broth.  You may even use chicken stock if you have it on hand. 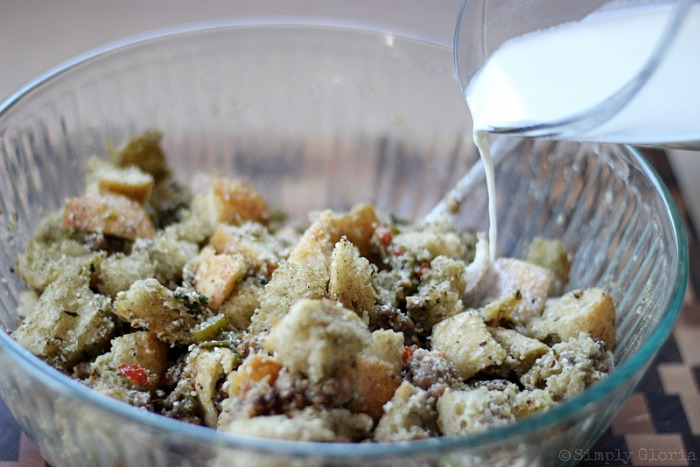 Time for the half & half cream… and the beaten egg. 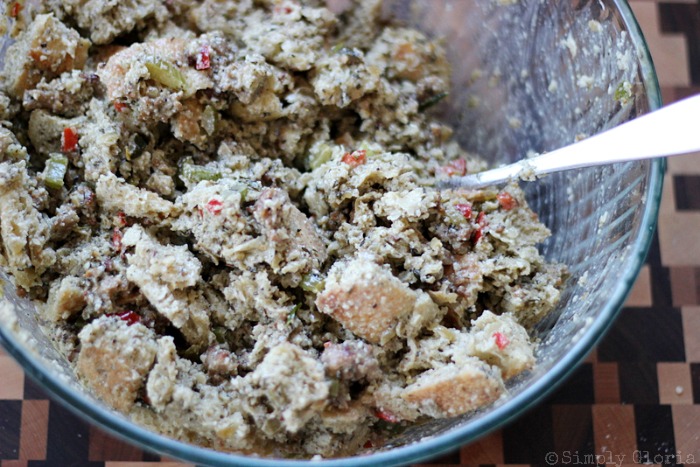 Stir it all up.  Hey, it may not be at the pretty stage.  But just be patient. 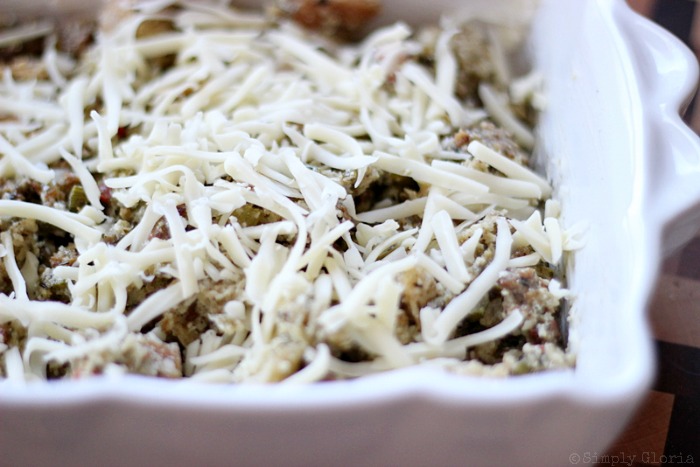 Place half of the stuffing mixture in a buttered 9 by 12-inch baking dish.  Layer the amazing Monterey Jack cheese.

The cheese is so melty delicious right there in the middle! 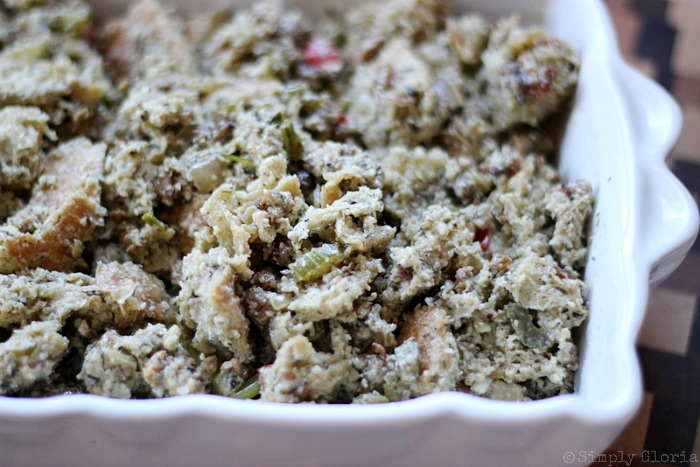 Put the rest of the stuffing mixture right on top of the cheese!

At this point, you may put the prepared stuffing straight into a preheated oven to bake OR stick in the refrigerator and bake the next day.  It bakes up beautifully either way! 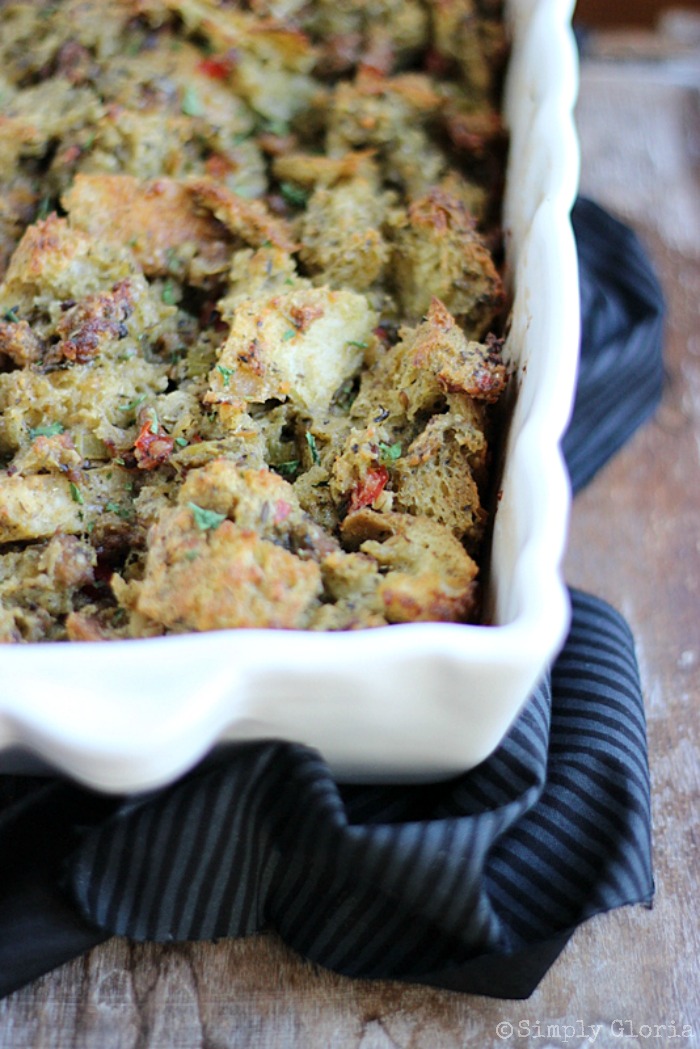 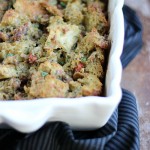 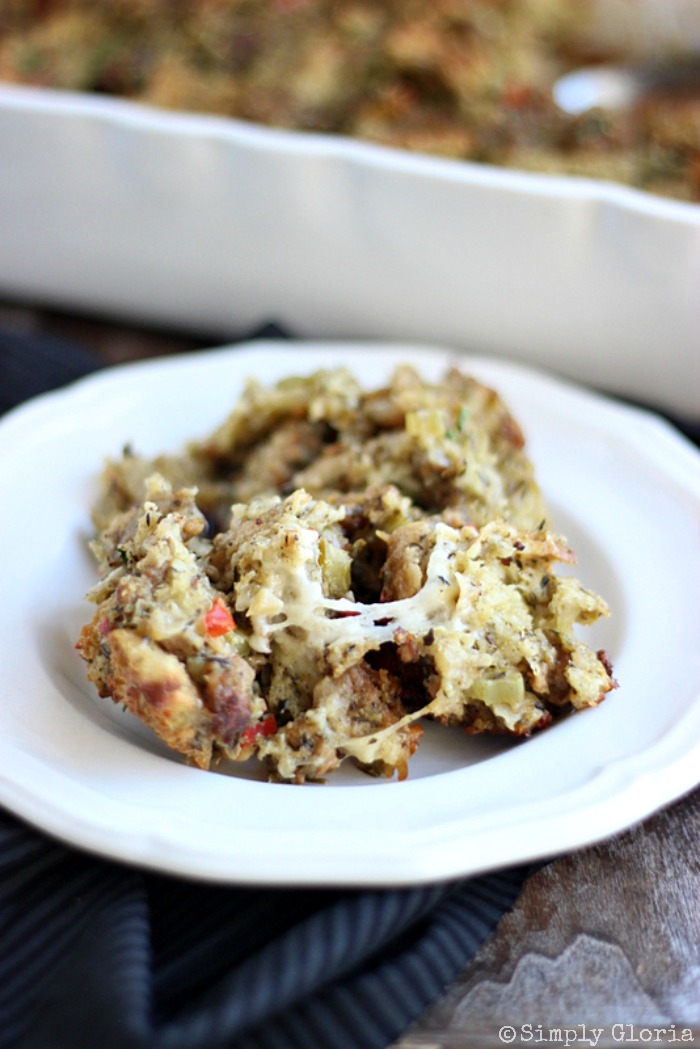