Indulge in a continuous swirl of cinnamon and brown sugar encased with tender, homemade dough.  Creamy cinnamon frosting seeping down into every cinnamon crevice. 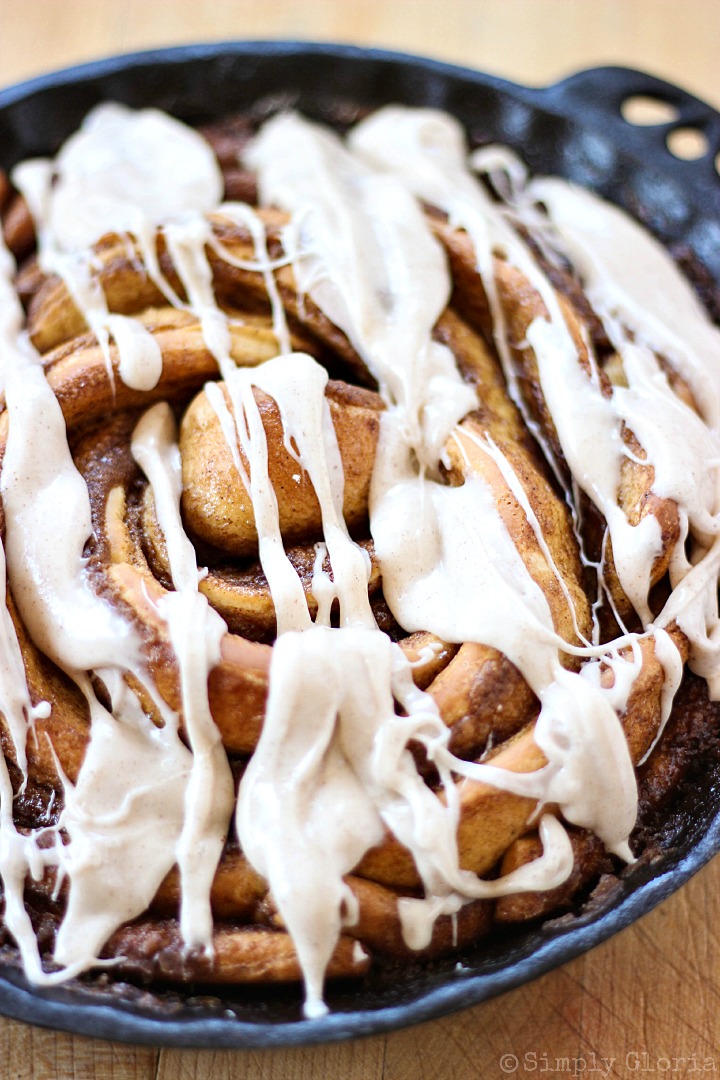 This Cinnamon Roll Ring is a totally different take on your typical everyday cinnamon roll.

It is one continuous spiral of buttery cinnamon filling that is in every single layer of made-from-scratch dough.  Then it’s all drenched with whipped Cinnamon Cream Cheese Frosting!

Oh, and this frosting… is so cinnamon-y delicious!  If you’re a frosting lover like I am, you’ll be licking this frosting bowl clean.  It’s really THAT good! 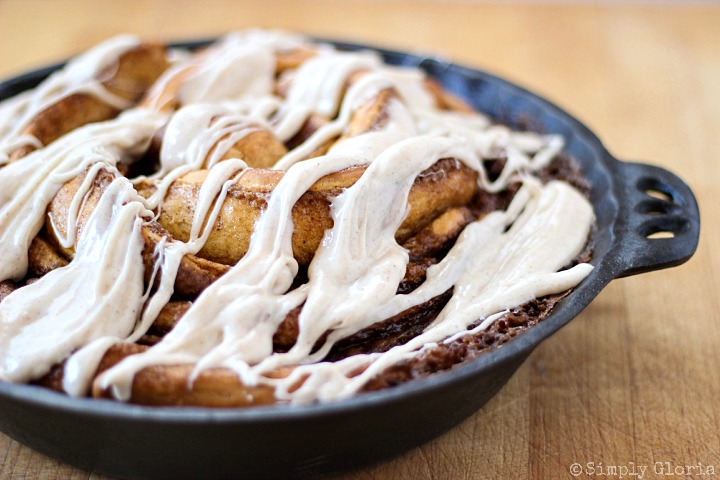 So, making this amazing ring of cinnamon is seriously simple!  .

It’s all made with tender, melt in your mouth, homemade dough.  But don’t let the homemade part scare you.  You can do this!  I’ll take you through the steps.

If this is your first time working with yeast, no need to feel intimidated.  Trust me, it’ll be your best friend– not your enemy.  I LOVE baking with yeast so much and I STILL jump with excitement when the shining star (i.e. YEAST) has puffed up my recipes!  It’s so rewarding. 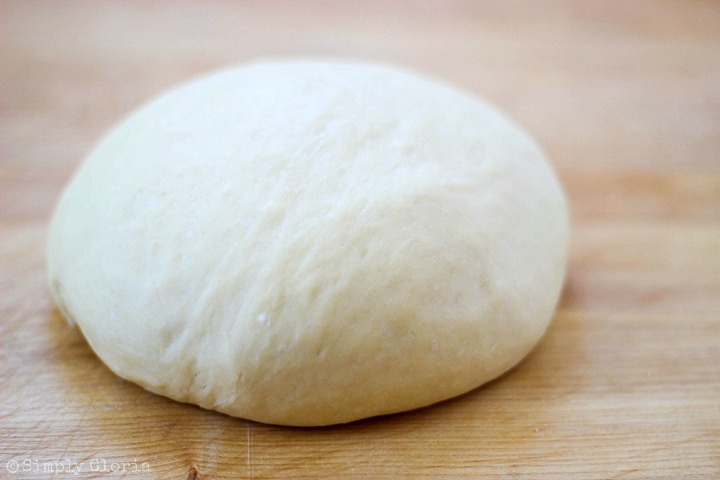 The dough comes together quickly.

This isn’t an all day adventure of letting the dough rise a hundred different times before you get to do something with it.  By adding the dry active yeast to sugar and warm water… it drifts off into it’s own little zone.  The proofing zone.  Just sit and watch the science project do it’s thing (foam).  All while you get your flour and other ingredients ready, of course.  And within minutes, you’ll have proofed yeast that has bubbled up and ready to add to the flour.

Allow the dough to rest for a few minutes after kneading it.  Because resting the dough relaxes the gluten and allows it to become tender after baked.  It also relaxes the gluten enough to spread out and not retract.  It’s always lovely when a relaxed ball of dough can cooperate. 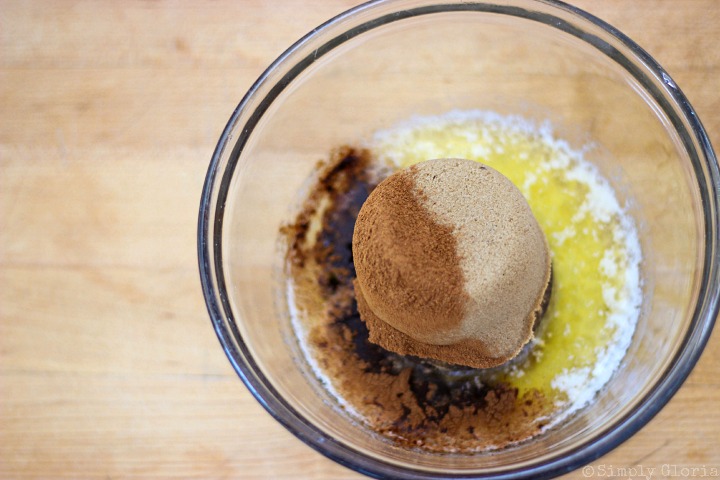 While the ball of dough is resting it’s gluten, prepare the melted buttery cinnamon filling.  Smell the cinnamon goodness!

Roll out the dough to about half an inch thick and spread on the {amazing} filling. 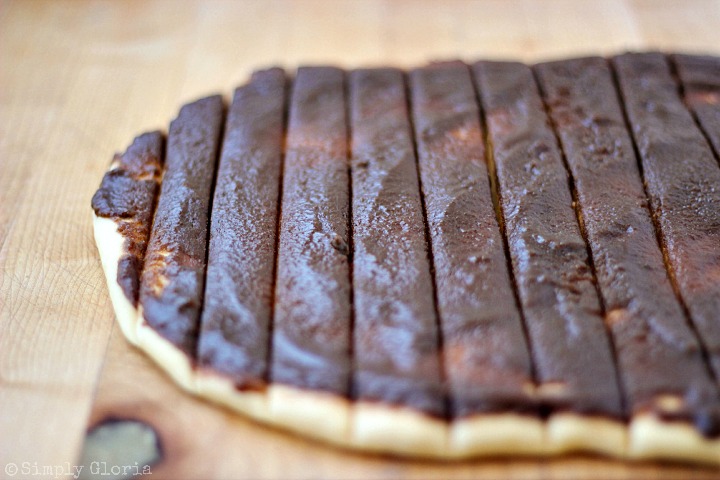 Cut into 1 inch strips all the way across.  If you’ve got a pizza slicer, use it!

There’s really no specific number of how many strips you come up with.  Just go until there’s no more cutting. 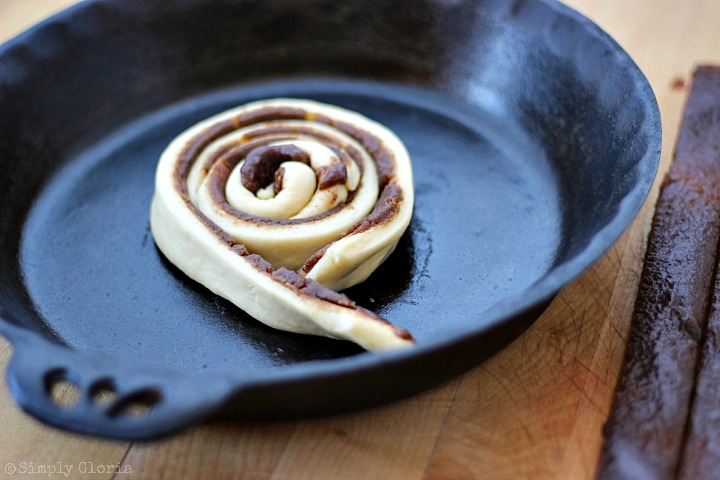 Start with the first strip of covered dough and place in the middle of the round baking dish with the cinnamon side going in towards the center. 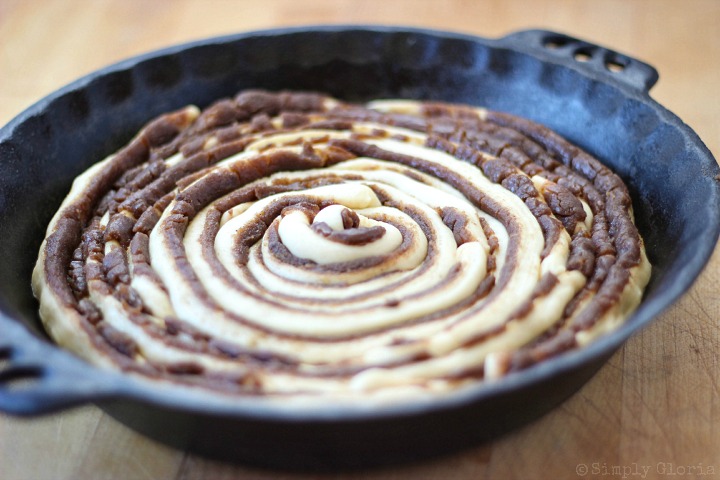 Continue with all the strips of dough until you’ve reached to the outer edges.  Be sure to keep them tucked down to the bottom of the pan.

Sometimes, I have a few extra pieces of strips that don’t quite fit into the pan with the others.  You can discard them OR use a small baking dish and make a teeny weeny individual Cinnamon Roll Ring! 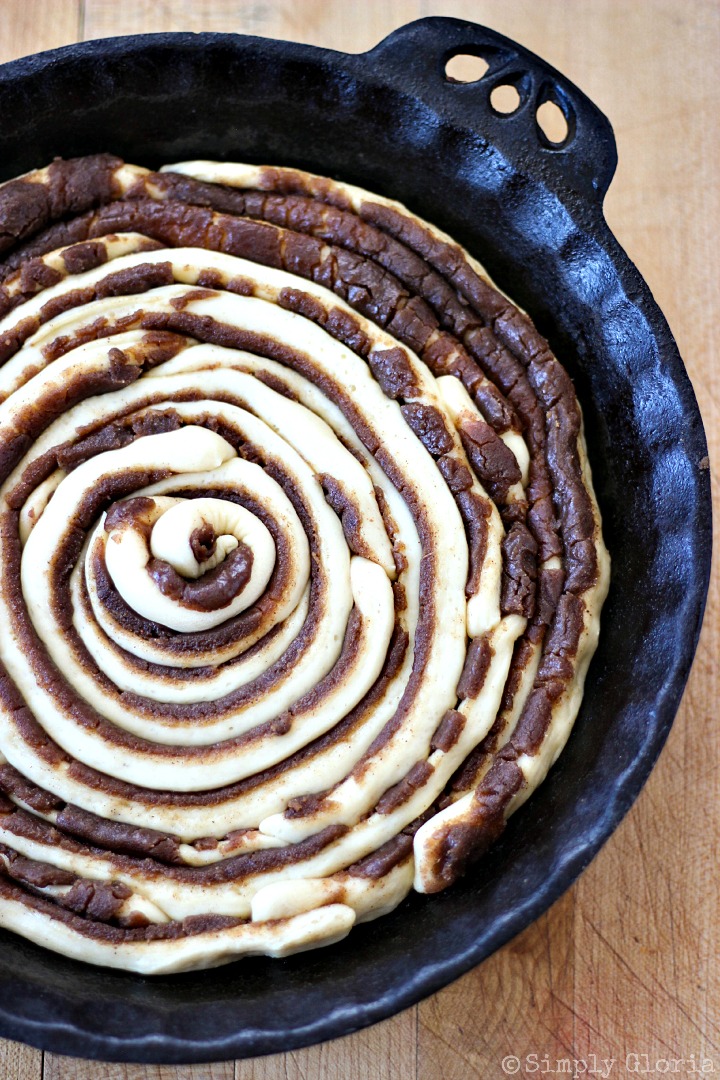 Bake and watch it puff right up into magical decadence! 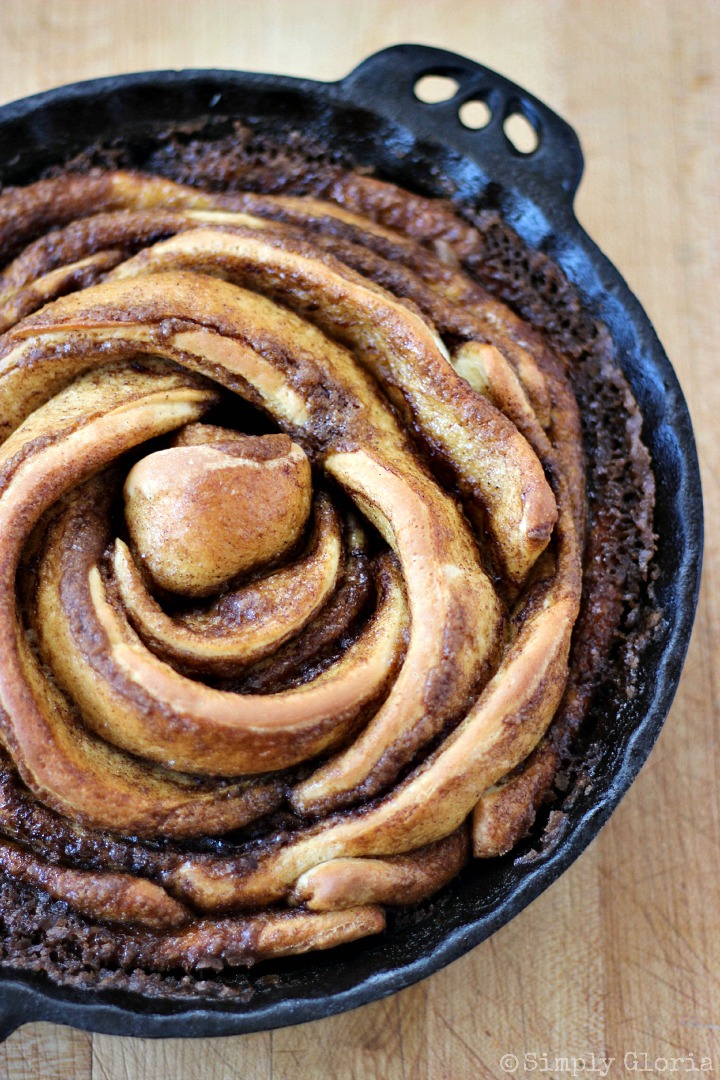 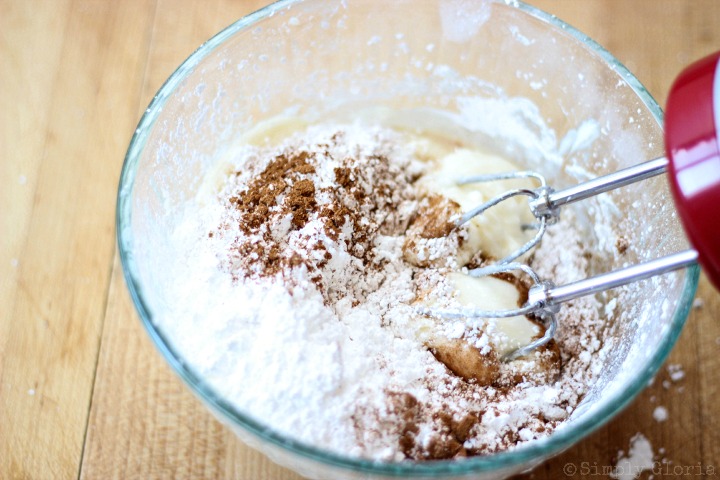 Spin all the ingredients together… 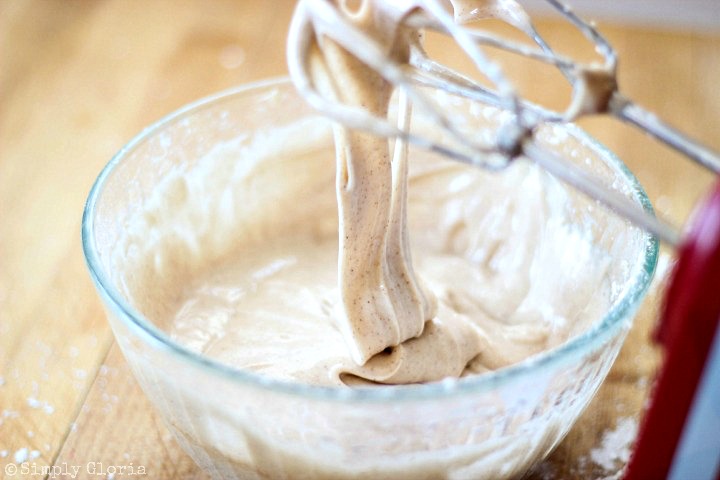 Now you’ve got ribbons of creamy cinnamon frosting ready to drizzle all over the warm (and puffy) baked goodness! 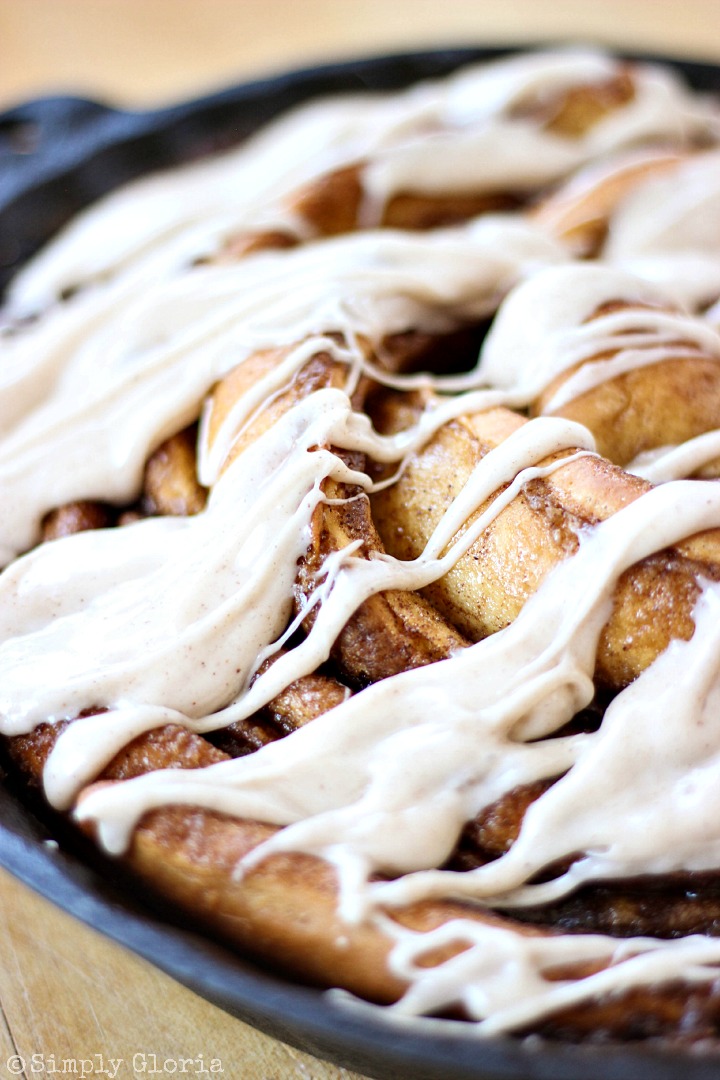 Or you could do what I always do…

And forget the drizzle business. 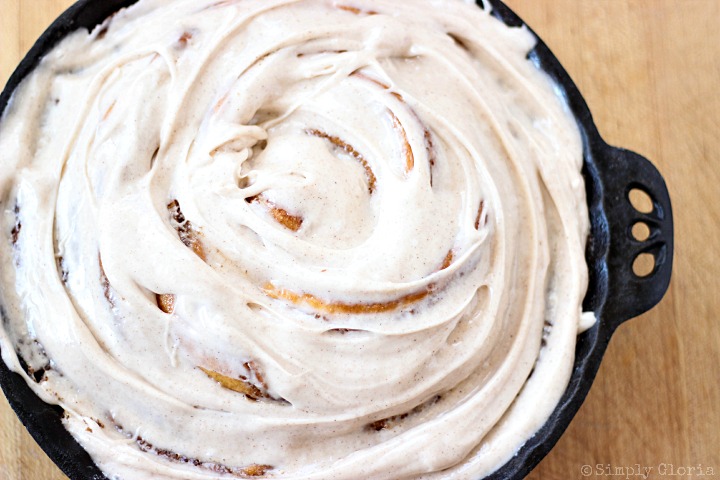 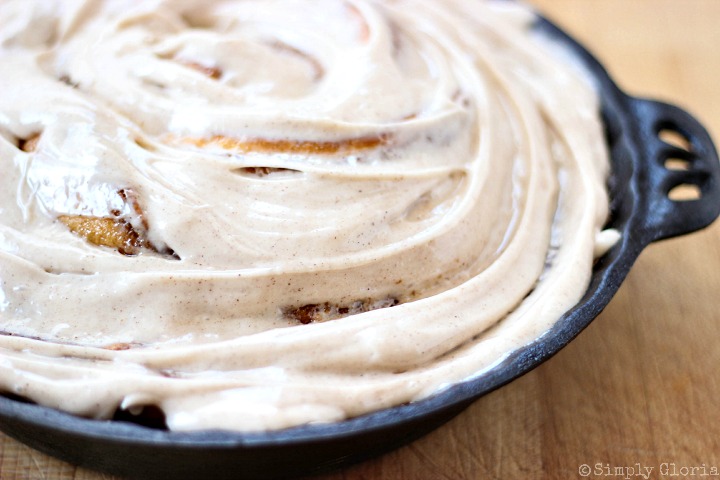 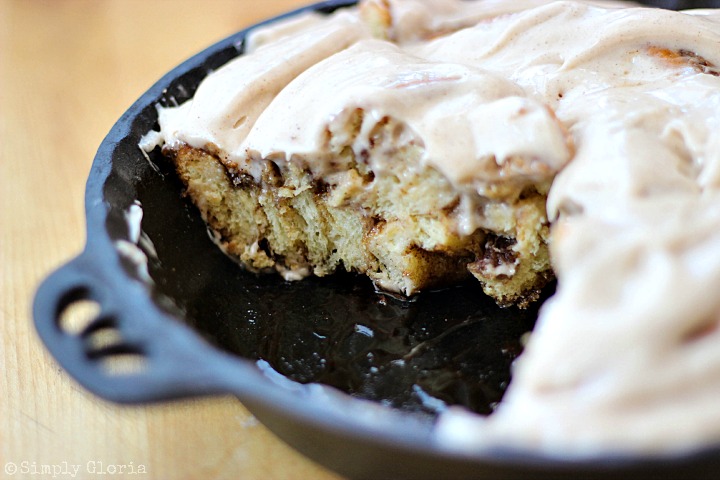 Select any size of piece that you wish… 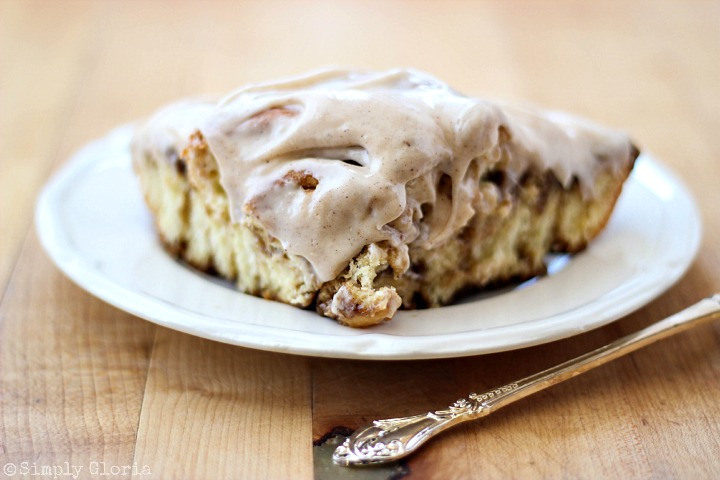 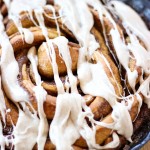 Indulge in a continuous swirl of cinnamon and brown sugar encased with tender, homemade dough. Creamy cinnamon frosting seeping down into every cinnamon crevice. This Cinnamon Roll Ring has one continuous spiral of buttery cinnamon filling that is in every single layer of made-from-scratch dough. Then it's all drenched in a creamy cinnamon frosting.
Write a review
Save Recipe
Print
Ingredients
cinnamon filling
frosting
Instructions
frosting
Notes
By Simply Gloria
Simply Gloria https://simplygloria.com/

Here are a few more quick and easy cinnamon ideas… 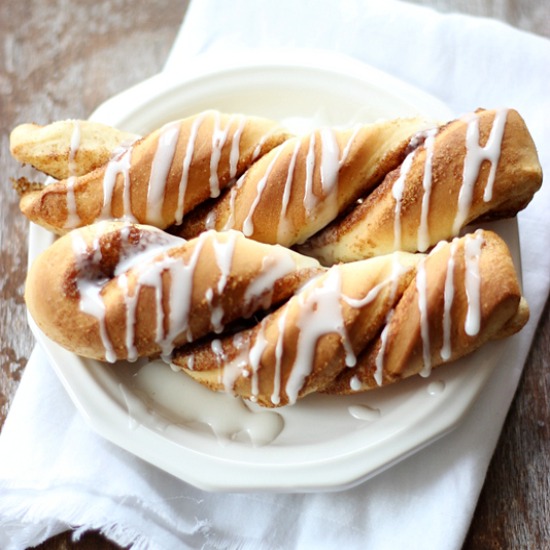 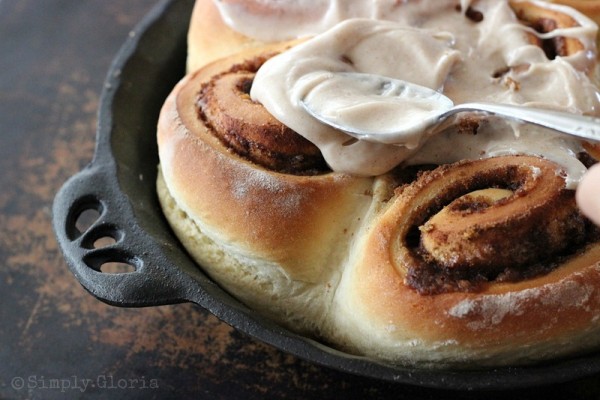 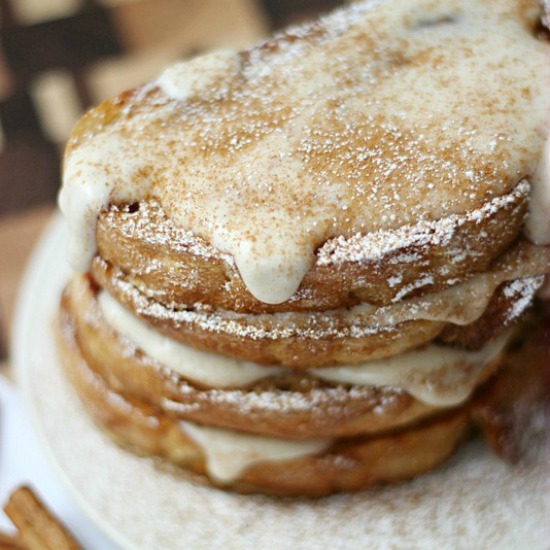